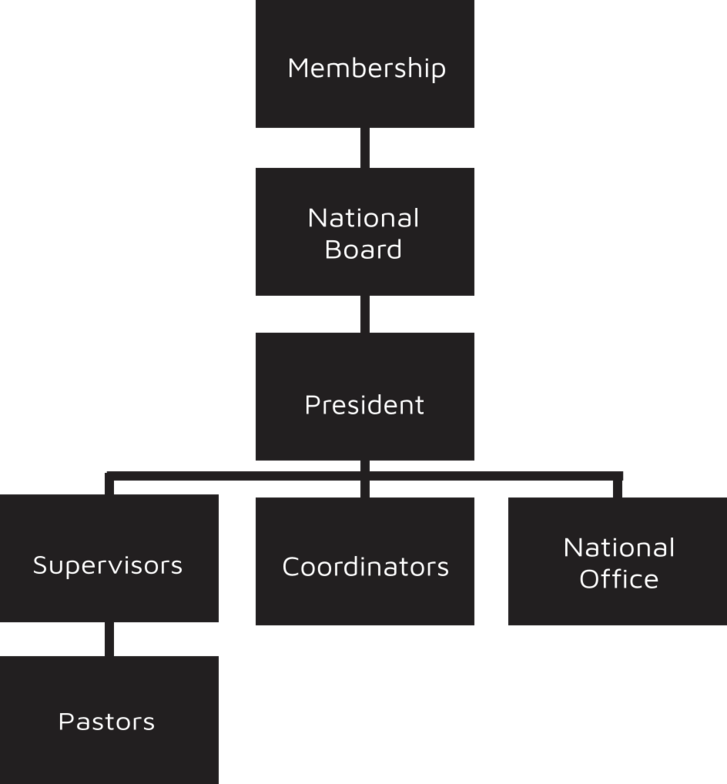 The Foursquare church uses a Modified Episcopal structure which actually employs elements from all three of the most popular forms of church structure. One of the goals of this system is to make room for both collaboration and individual leadership. Another goal is to provide the stability and safety that come from having checks and balances without hindering our leadership’s ability to lead. The structure also provides a balance of local and denominational leadership. The idea of structure is not to replace relationship in the running of the church, but rather to reduce conflict and duplication of efforts by defining roles and responsibilities.

In a Congregational system of government a church is governed by a form of democracy.

Church members vote on important issues and appoint board members to govern the church. Foursquare uses this form of government nationally at its AGM. Through a representative vote, national membership appoints National Board members through ratification and makes decisions regarding fundamental issues such as changes to our Constitution and Bylaws. At the local church level, congregational voting is needed to ratify church council members and to make decisions on important issues such as property purchases.

A Presbyterian form of church structure is essentially leadership by committee.

Although staff may be employed by a church, the church is led by a committee or “session” of elders. Representatives from the local church committee may sit on a regional committee and a national committee of representatives may meet annually or biannually as the highest governing body. Foursquare uses government by committee at a national level through the governance of the National Board. The National Board appoints a president to serve the national church and makes decisions on important administrative issues. At a local church level, the church council works with the Lead Pastor to administrate the affairs of the church.

An Episcopal form of church structure is based on leadership by appointed individuals.

In this system authority is generally delegated downwards and those who delegate then oversee those appointed. Foursquare uses a Modified Episcopal form of government at a national level through the appointment of a President by the National Board and the appointment of Unit Supervisors and National Coordinators by the President. At a local church level, the Lead Pastor is appointed by the President in consultation with the Unit Supervisor and Church Council. Staff Pastors are appointed by the Lead pastor with the advice and approval of the Church Council. While Foursquare does include elements of Congregational and Presbyterian church government, the emphasis is placed on the Episcopal model because of our convictions that God calls individuals to leadership and that the laying on of hands seen in the bible, is a form of appointment employing a downward delegation of authority.